Angela Merkel’s remarkable election result confirms her position as the dominant politician in Germany and so also in Europe. It is assumed she will get the eurozone she wants: Germany writ large. That may prove right. Alas, if she does, it is going to be a deeply depressing spectacle.

Wolfgang Schäuble, Germany’s finance minister, laid out the view on which Berlin’s current policy is based, with sobering clarity, in the Financial Times last week. The doomsayers, he argued were wrong. Instead, “the world should rejoice at the positive economic signals the eurozone is sending almost continuously these days”. If depressions and mass unemployment are a success, then adjustment in the eurozone is indeed a triumph. Mr Schäuble accuses his critics of living in a “parallel universe”. I am happy to do so rather than live in his.

Ambrose Evans-Pritchard of The Telegraph has provided a colourful rejoinder. Kevin O’Rourke of Oxford and Alan Taylor of the University of California, Davis, offered a sober assessment, concluding that a break-up is not unthinkable. 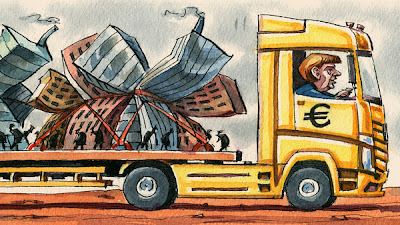 Posted by Yulie Foka-Kavalieraki at 9:03 PM