The eurozone has emerged from recession, no thanks to austerity

Finally, the recession in the eurozone is over: for the first time for almost two years, the region's GDP has grown again in the second quarter of this year. What is more, leading indicators point to a continuing recovery through the summer and autumn, albeit at a rather muted speed.

While German politicians in particular are now claiming that the recovery is a result of "consistent stability-oriented policy", closer scrutiny shows that this claim is not very plausible. Instead, the turnaround can be directly traced back to a reversal in two important areas of macroeconomic policymaking. First, Mario Draghi's decision from the summer of 2012 to make the European Central Bank to a de facto lender-of-last resort for embattled government. Second, the gradual relaxation of austerity policies in the euro area.

Since the onset of the euro crisis in 2010, policymakers have tried in vain to end it. Neither the establishment of the temporary European Financial Stability Facility nor the permanent European Stability Mechanism, both endowed with several hundred billion euros in lending capacities, managed to calm the markets.

The passage of both harsh austerity packages and the fiscal compact – which forces eurozone countries to limit structural budget deficits to 0.5% of GDP – have left financial markets completely unimpressed. Instead, after each new policy measure brought forward by the finance ministers, interest rates on bonds of southern European countries such as Spain and Italy continued to climb and the region's economies slid deeper into recession. 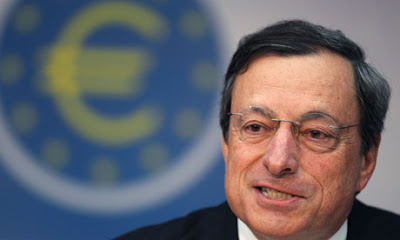 Posted by Yulie Foka-Kavalieraki at 4:56 PM