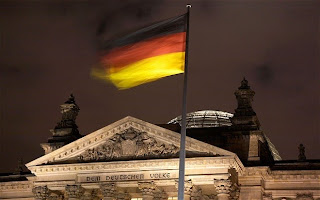 The IMF said Germany’s vast trade surplus must be slashed in half to rectify the eurozone’s North-South imbalances, and warned that fiscal overkill could abort recovery and set off an EMU-wide chain reaction.

“Fiscal over-performance should be firmly avoided,” said the Fund in its annual health check on the country.

“Should growth prospects sour and labour markets weaken, proactive fiscal policies would be needed. A large shock may necessitate invoking the escape clause under the debt brake rule in order to support domestic activity and employment,” it said, referring to a clause in the German constitution mandating a cut in the structural deficit to near balance by 2016.

The IMF said Germany is barely above recession level, with growth of just 0.3pc this year followed by a Japan-style stagnation for the rest of decade with a peak growth rate of 1.3pc. The country will lag the United States by the biggest margin in modern history each year until 2018.

While the language of the IMF report is polite, it masks a bitter dispute between the Fund and Germany over the nature of the EMU malaise, and whether austerity and reform really have cleared the way for a viable recovery.