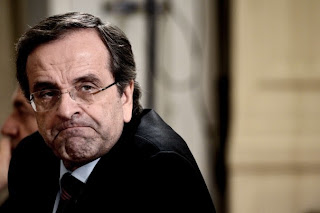 Greek Prime Minister Antonis Samaras has come to Washington to promote his crisis-plagued country as a source of stability in a troubled region.

Ahead of a meeting with President Obama on Thursday, Samaras was confident that Greece could play a geopolitical role “as a bastion of stability” in the eastern Mediterranean. Given new energy discoveries in Greece, Israel and Cyprus, and a deal for a new pipeline carrying Azerbaijani gas through Greece, Samaras also envisions his country as a provider of energy security to Europe.

“If I had come here a year ago, you would have seen Greece being unstable around an area of stability. Now we look good compared to the region,” Samaras joked Wednesday at a meeting with The Washington Post editorial board.

Samaras is seeking a vote of confidence from Obama and support for his effort to return growth to Greece. The country has entered the fourth year in a program of tough austerity and structural reforms in return for loans from the International Monetary Fund and the European Union, in an effort to avoid default and an exit from the euro zone. The IMF estimates that Greece will reach a primary surplus this year, which is a precondition for its lenders to consider further debt relief.

Samaras did not shy away from describing the tough economic reality on the ground, with Greece in its sixth straight year of recession, “a world record after the Great Depression,” he said. Unemployment has spiked to 27.5 percent, and the rate is more than 60 percent among young people.