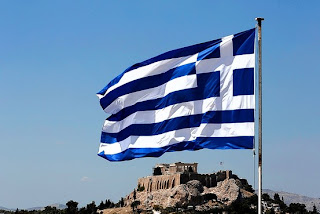 After two bailouts, Greece needs yet more money. While that is hardly surprising, the debate over how it should get it has the potential to ignite tumult in the seemingly calm euro zone.

Three problems are set to dog officials over the next few months. Greece has a shortfall of cash for the immediate future. Beyond that, it will need more aid to sustain itself through to 2016. And its debt remains too high.

Athens has to plug a roughly €4 billion ($5.3 billion) gap in its finances this year and next, as disappointing tax and privatization revenues have burned holes in its budget plans.

It will need to find yet more money—starting later next year—because of a worse-than-expected recession, poor prospects of returning to private markets as originally foreseen, and an unexpected debt-repayment bill to euro-zone central banks.

The International Monetary Fund, which cofinances Greece's bailout alongside euro-zone governments, can only continue to lend to a government if it is "fully funded" for another 12 months. As of this month, the IMF says, Greece isn't. 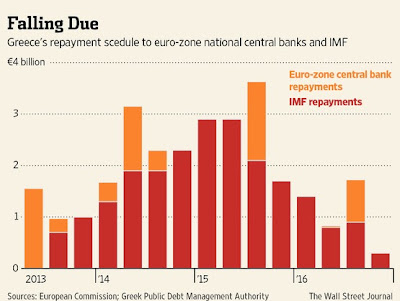 Posted by Yulie Foka-Kavalieraki at 7:46 PM