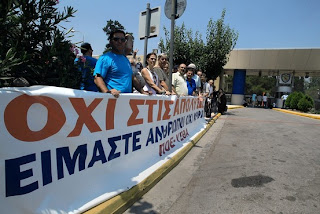 Greece faces an additional financing shortfall of nearly €11 billion ($14.6 billion) by the end of 2015, the International Monetary Fund said on Wednesday, warning that the gap could be bigger if growth falls short of estimates.

That figure is higher than earlier euro-zone projections, and combined with the IMF's estimate of the amount of debt relief Athens needs, would force Europe to cover any extra financing needed to keep Greece afloat, including potential write-offs of rescue loans extended to Greece over the past three years, in order to make the country's debt load sustainable.

That puts the IMF at odds with the euro zone's strongest member, Germany, where the government is avoiding talk of debt reductions and new Greek loans ahead of elections in September.

Without additional euro-zone financing, the IMF said, Greece might not be able to pay back its loans to the fund. That would it make it even more difficult for Athens to tap private financing or attract investment needed to spur growth. As Greece repeatedly risked defaulting on its loans over the past several years, officials throughout Europe openly discussed the possibility of a Greek exit from the currency union.

In turn, it could then fuel financial problems throughout the currency union, starting in Portugal, Spain and Italy, but spreading to the core economies such as France, which are vulnerable to ailing members. 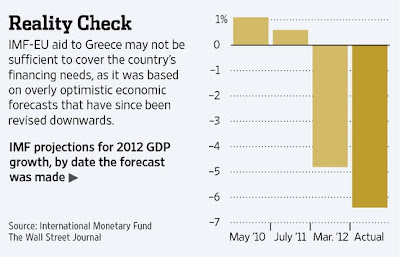 Posted by Yulie Foka-Kavalieraki at 8:16 AM