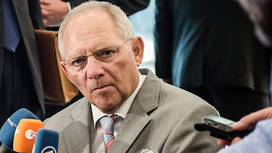 Wolfgang Schäuble, the German finance minister, may have set the cat among the pigeons by stating that Greece will need a third rescue programme next year. But the pigeons are mostly to be found among opposition politicians in Germany’s federal election campaign. Others know that Mr Schäuble’s words differ only marginally from earlier policy statements, and are entirely consistent with them. That they do not amount to a break in policy, however, does not mean they are insignificant.

Ever since the Bundestag’s vote on the second round of aid for Athens, Berlin has said a third may have to be considered, though without trumpeting it too loudly. Given the political decision taken last year to keep Greece within the euro, a more concrete commitment was a logical refinement of existing policy that was bound to come sooner or later. The second, just as important part of Mr Schäuble’s statement was to underline yet again that Germany is opposed to a writedown of Greece’s debt to official creditors. That, too, is fully in line with existing policy.

Both are also what the opposition Social Democrats will have to stand by should they be in government after the election. The SPD does not want to be the party to cut off Greece’s lifeline, nor to accept explicit losses on the loans Germany has extended. So there is little that Peer Steinbrück, SPD candidate for chancellor, can use Mr Schäuble’s remarks for, except to accuse him of underplaying the problems with Greece’s adjustment programme. Indeed, Mr Schäuble may just have calculated that the government has less to lose politically from talk of a third rescue than from an accusation that the government is not being square with the German people.

Beyond domestic electoral tactics the remarks – and the policy continuity they represent – illustrate well Berlin’s diplomatic game vis a vis Athens and the International Monetary Fund.