The Unintended Consequences of Cyprus

As most European officials in Brussels prepare for their summer break, some are still toiling in the steamy heat of Nicosia.

Experts from the so-called troika of the European Commission, European Central Bank and International Monetary Fund are in the Cypriot capital to check on the country's progress in implementing the €10 billion ($13.2 billion) bailout it reluctantly accepted in March.

Progress may not be the right word. The economy is forecast by consultancies such as Ernst & Young to shrink by more than 10% this year, which would be more than the 8.7% forecast by the troika in March, and to continue contracting through 2016.

These are the predictable consequences of the experiment its lenders are imposing on Cyprus. But there are some unpredictable ones too.

For the first time since the start of the crisis, a country is being subjected to the bloc's familiar recipe of budget austerity, together with a new dogma of bank "bail-ins," whereby bank creditors or depositors, and not taxpayers, foot the bill for failed banks by forcibly forgoing some of their loans or deposits.

The tiny island, closer to Syria than it is to Greece, has been in financial lockdown for the last three months. For the first time in the 12-year history of the common European currency, capital controls have been imposed to keep cash from fleeing. 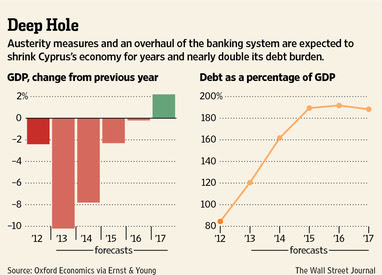 Posted by Yulie Foka-Kavalieraki at 11:53 PM