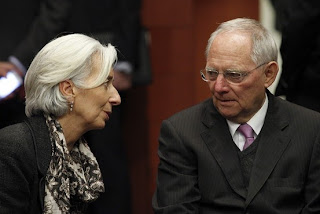 Monday's agreement to continue lending money to the Greek government was the easy part for Europe. The EU and IMF haven't spent three years and more than €200 billion just to cut the country adrift now.

The hard part will be getting paid back.

German Finance Minister Wolfgang Schäuble and IMF Managing Director Christine Lagarde have sometimes hailed Athens's "achievements," such as they are. Yet Greece's debt-to-GDP ratio stood at 157% of GDP at the end of last year, even after a restructuring that drastically reduced the value of its privately held sovereign debt. The budget deficit in 2012 was 10% of GDP. And that's on top of a 26.8% jobless rate, five years of shrinking GDP, and further anticipated shrinking of 4.4% this year.

All this underscores what is slowly becoming clear even in Brussels and Frankfurt: Greece will never repay the money it's been lent to "save" it. The current debate over whether Greece has done enough by way of reform, tax hikes and spending cuts to have earned the next tranche of bailout funds is largely beside the point. If Greece is cut loose, or walks away, its euro-zone creditors will lose their money. The Greeks and the Germans are surely both aware of this.

They're also aware that Greece's external debt position is far worse than when the bailouts began—when its debt stood at a mere 129% of GDP—and that any talk of debt sustainability in Greece has become a joke.

More
Posted by Yulie Foka-Kavalieraki at 1:39 AM