The International Monetary Fund warned the eurozone yesterday that it may be forced to write off a chunk of Greece's debt after identifying an $11bn black hole in the finances of the recession-stricken country.

In its regular update on the programme of financial austerity and structural change agreed to by Athens in return for financial help, the Washington-based IMF said weak growth and a sluggish pace of reform had opened up a funding gap in both 2014 and 2015.

The IMF, which is struggling to persuade developing countries to back Greece's bailout, said "debt sustainability" continued to be a risk.

The commitment of Greece's European partners to provide relief as needed to keep debt on the programmed path remains, therefore, a critical part of the programme. 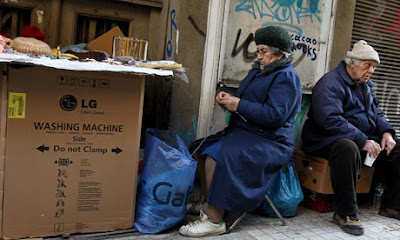 Posted by Yulie Foka-Kavalieraki at 8:08 PM