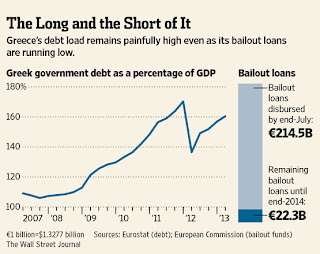 The euro zone on Friday approved the payment of a €2.5 billion ($3.32 billion) installment from Greece's international bailout, ensuring the first victim of the bloc's debt crisis won't run out of money over the summer.

Euro-zone governments will also transfer an additional €1.5 billion in profit from the European Central Bank's bond-buying program to Athens once all national approval procedures have been fulfilled on Monday, said Simon O'Connor, a spokesman for the European Commission.

Senior aides to euro-zone finance ministers held a conference call Friday morning to determine whether Athens had fulfilled all the commitments it made earlier this month in order to receive the payment. Germany and a handful of other countries still need their parliaments to sign off on the aid.

Officials believe the approval of this aid payment will stave off further complicated discussions over Greece's bailout program until the fall, after federal elections are held in Germany. After that, many expect a divisive debate to ensue on how to cut Greece's massive debt mountain—more than 160% of gross domestic product—and whether the euro zone should forgive Athens some of the money it is owed.