Euro-zone officials are preparing to confront a fresh test in the region's debt crisis: finding yet more financing for Portugal, Greece and Cyprus on top of more than €200 billion ($256 billion) the bloc already has devoted to bail out its weakest members.

Euro-zone tension has flared of late, after several months of relative calm, with Portugal's political crisis last week, with tricky negotiations coming to a head over releasing more aid to Greece and with evidence the Cypriot economic program is veering off track.

These developments, coming ahead of a meeting of euro-zone finance ministers Monday, underlined that some of the euro zone's troubled economies will need more financial help, even as some concerns eased over the weekend. Portuguese Prime Minister Pedro Passos Coelho appeared to settle the weeklong crisis by shuffling his cabinet and getting a commitment from the ruling parties to stay united. And officials reported progress in the Greek talks, with advances in discussions over public-sector payroll cuts Athens had promised in its bailout. That opens the likelihood ministers will unlock at least part of the next aid payment of €4.8 billion or more.

Still, fully resolving these questions likely will be pushed into what could be a tempestuous autumn. Talks will heat up after German elections in September, when analysts expect Chancellor Angela Merkel, who is forecast to win re-election, to gain latitude for taking tough decisions. Election campaigns could also begin in Portugal.

And Greece will come into question since it won't, as things stand, have 12 months of forward financing needed to get the necessary support from the International Monetary Fund for further releases of rescue funds. Meanwhile, Cyprus is widely expected to need more money. 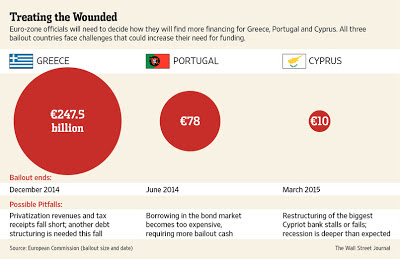 Posted by Yulie Foka-Kavalieraki at 2:37 AM