We Need a New Grand Bargain in Europe 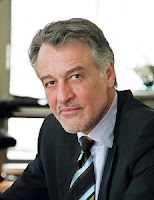 This article examines the linkages between economics and politics, markets and institutions during the most serious crisis that has hit Europe for decades. With the bursting of a big international financial bubble at its origin, it has exposed a systemic failure in the euro area coupled with different national failures.

Many unthinkables have become reality since then at both, national and European level, but we are still nowhere near the end of the crisis. The distribution of the burden of adjustment within and between countries remains highly divisive, and so is the overall direction of the economic strategy: they are closely interconnected. EMU has become a make or break issue for European integration. Europe needs a new grand bargain to escape from the zero-sum mentality that has prevailed between creditors and debtors, between North and South.

Read the Paper
Posted by Yulie Foka-Kavalieraki at 2:03 PM