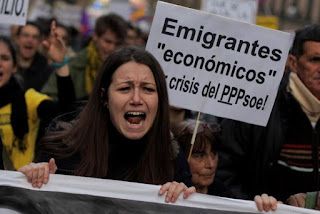 Evidence of large-scale migration of Southern Europeans seeking a better future in the north of the continent was underscored on Thursday by a report by the Organization for Economic Cooperation and Development.

The report on immigration from the OECD, the Paris-based organization that groups governments of the world's richest countries, showed Greeks and Spaniards, in particular, have been moving to Germany, fleeing recession and sky-high unemployment at home.

The numbers back up a report released by the German statistics office in May, which revealed that immigration to Europe's largest economy hit a 17-year high last year.

The OECD said around 34,000 Greeks and 28,000 Spaniards moved to Germany between September 2011 and September 2012, according to preliminary data for that period. The number of Greeks and Spaniards emigrating over the four-year period to 2011 more than doubled, the OECD said.

"Altogether, this represents an increase of almost 40,000 additional immigrants from crisis countries to Germany in 2012 compared to 2011," the report said.