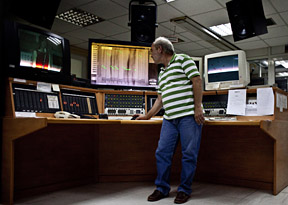 After a series of talks over the shutdown of national broadcaster ERT and the firing of all 2,656 workers, Greek Prime Minister Antonis Samaras' coalition has lost one of its partners, but he said he will finish his term and push Greece back into recovery.

Samaras, the New Democracy Conservative leader, now is allied with his long-time rival and coalition partner, the PASOK Socialists, after the abrupt pull-out by the tiny Democratic Left (DIMAR) whose leader, Fotis Kouvelis, insisted all the ERT workers be brought back.

"The way the state broadcaster was handled … signals a sign of further reform efforts in the public sector," DIMAR spokesman Vassilis Economou said in an interview on Greek television. These reforms should come by respecting democratic core principles, and that didn't happen in the case of ERT, he said.