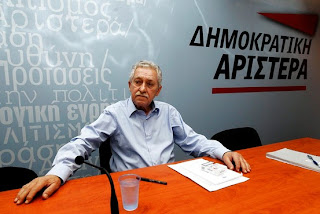 Greece's coalition government split Friday over its efforts to cut back on public employees, underlining the continuing difficulty of meeting the deeply unpopular terms of the country's international bailout.

While some analysts suggested the departure of the obstreperous junior partner, the Democratic Left, could be a blessing in disguise for the remaining two, the specter of renewed political instability unnerved European markets once again.

The government has a freer hand to push ahead with its agenda—but also a thinner majority to rely on just as an emerging funding shortfall in the country's already stretched bailout program could necessitate extra cutbacks.

"Political instability is the last thing that Greece needs at present," Citibank strategist Valentin Marinov said in a note. "Athens may be asked for additional austerity measures to compensate for the funding shortfall. This may be difficult for [the government] to commit."

Reducing the size of Greece's bloated public sector has proved the most politically challenging task for the government. 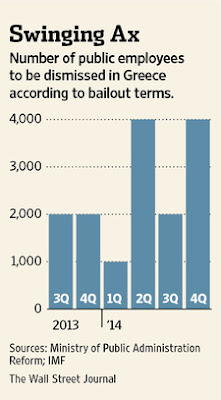 Posted by Yulie Foka-Kavalieraki at 10:08 PM