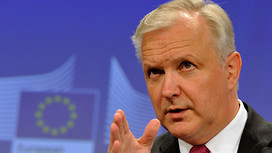 Olli Rehn, the European Commission’s economic chief who has been responsible for Brussels’ management of Greece’s two bailouts, lashed out at the International Monetary Fund’s criticism of the rescue, accusing the fund of revisionist history.

Mr Rehn compared the IMF’s harsh report of its own and the EU’s handling of the first €110bn bailout to a breach of the transatlantic “in together, out together” principle developed in the Balkans war in the 1990s.

“I don’t think it’s fair and just for the IMF to wash it’s hands and throw the dirty water on the Europeans,” Mr Rehn said at an economic conference in Helsinki on Friday.

The IMF report, published on Wednesday, argues that a restructuring of Greek debt should have occurred in early 2011 when it became clear the bailout programme was veering off track, but says such a move was blocked by European officials. A €200bn sovereign debt restructuring did not occur until February 2012.