The Greek economy: Daring to hope, fearing to fail 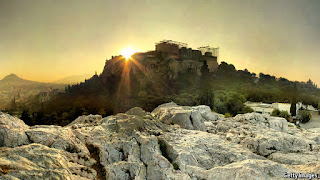 The protesters were back in Syntagma square on May 1st, a disquieting reminder of the pressures facing the nearly one-year-old coalition government as it strives to meet the terms of Greece’s second bail-out. These strains will intensify if the economy remains stuck in recession. So how plausible are sightings of an economic recovery on the horizon?

In central Athens there are some promising signs. This week’s protests aside, the demonstrations are fewer than they were. Ermou, a pedestrianised shopping street, has some boarded-up premises but it is busy. A handful of new shops have opened in Kolonaki, an upmarket district, as rents have come down. There are fewer waiters beseeching custom at empty restaurants. Across the country confidence has risen since its low last June, when fears of a “Grexit” from the euro were at their peak. Although the improvement has been among businesses rather than consumers, a composite index from the European Commission stands at its highest point since late 2009, before the sovereign-debt crisis erupted (see chart). 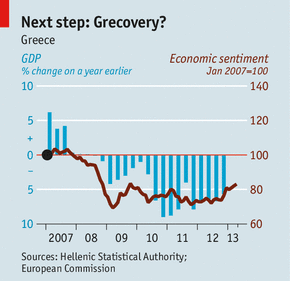 Tourist bookings for the crucial summer season are buoyant. Work on motorways that had been suspended for two years recommenced in April. Liquidity is returning to an economy parched of credit. The government has made a start in paying off the money it owes suppliers, which was over 4% of GDP late last year. Bank deposits held by households and firms, which had fallen by 37% last June from late 2009, have since recovered by 9%.

A turnaround must occur sooner or later: GDP has shrunk by 20% since 2007. The ordeal is not over. Output is forecast to fall by a further 4.4% this year, not least because of more austerity. But the measures are having an effect. The government’s primary deficit (ie, before interest payments) should disappear this year, having already fallen to 1% of GDP in 2012 from 10.5% in 2009. Yannis Stournaras, the finance minister, says it is feasible for the government to run a primary surplus of 4.5% of GDP from 2016.