How Samaras Got His Groove Back

A year after Greece's cliff-hanger elections, Prime Minister Antonis Samaras has displaced Alexis Tsipras, who heads the country's radical-left Syriza party, as the man to watch. Last year, it was Mr. Tsipras who stunned observers after Syriza came a close second to Mr. Samaras's center-right New Democracy party in the June parliamentary contest.

Now it is Mr. Samaras who has the initiative, charting a course whose cumulative successes have tempered political passions while strengthening Greece's longer-term prospects. Gone are the occupations, the massive protest rallies and the violent, anarchist-led disruptions. When Parliament voted last month on a sweeping bill to implement the next stage of the bailout program, protest calls by the public-sector unions, the Communist Party and the anarchists met with only a tepid public response.

This in a country with a daunting 27% unemployment rate. Effectively, the Greek public has given Mr. Samaras a grudging vote of confidence to proceed with the rescue program.

Given the dire conditions prevailing in Greece one year ago, this is a extraordinary turnaround. With the country's economy in collapse and the credibility of its political establishment in tatters, the fresh-faced Mr. Tsipras seemed well-placed to take power whenever the next elections were called. Mr. Samaras overcame a rocky start as prime minister to forge an unlikely coalition with the once-powerful Pasok and the small Democratic Left party. 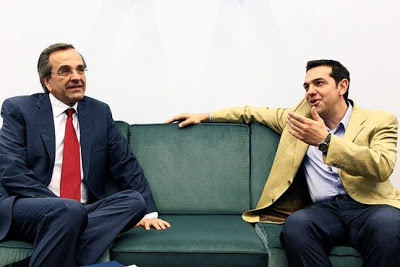 Posted by Yulie Foka-Kavalieraki at 10:40 PM