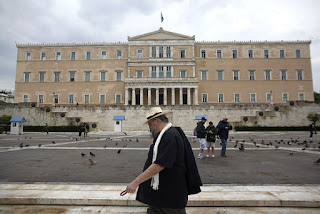 What a difference a year makes.

On May 17, 2012, Fitch cut Greece's rating to triple-C from B-minus, citing concerns the country might exit the euro as it headed toward a fraught second parliamentary election. Tuesday, Fitch reversed that cut, a sign that while Greece is still far from recovery, the country is going in the right direction.

That makes the upgrade a significant step for Greece—and the euro zone.

Fitch cites many factors that have encouraged investors and companies to start putting money to work in Greece in recent months, a stark contrast to its toxic status a year ago. Most important, fears of a Greek euro exit have been sharply reduced, and there is a degree of political and social stability.

Fitch estimates Greece has clawed back 80% of the competitiveness lost during the boom against its euro-zone peers. The country has undertaken its first major privatization since its bailout, and its banks are being recapitalized, as well as seeing deposits return.