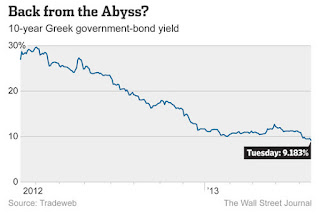 Investors are returning to Greece, lured by receding fears that the troubled country will leave the euro and the high returns offered by many of its battered assets.

It is a remarkable turnaround. Only a year ago, Greece was toxic territory for investors. A debt restructuring had just wiped out more than €100 billion ($130 billion) in government bonds. The stock market stood at one-tenth its 2007 levels. A political earthquake had the country poised for a chaotic election. 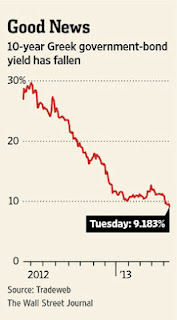 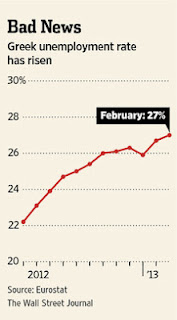 But now the markets have turned. Months of relative calm in Europe—and the pressure to go somewhere, anywhere, for yield in a low-interest-rate world—has investors taking another look. The Athens stock market has rallied more than 80% in the past 12 months, with the Athex Composite Index rising 0.8% on Tuesday. Greek government bonds have been on a tear since June.

The Greece bulls say the threat that the troubled country will quit the euro zone—or be pushed out by Germany—has all but passed, and the huge depression in asset prices during the crisis has left choice buying opportunities. European Central Bank President Mario Draghi's pledge last summer to do "whatever it takes" to save the euro was a critical milestone for many investors. On Tuesday, Fitch Ratings upgraded Greece one notch to single-B-minus—still deep in junk territory—saying the chance of a euro exit has "receded."

Posted by Yulie Foka-Kavalieraki at 10:27 AM