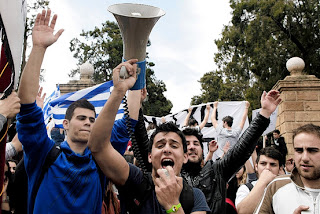 Euro-zone governments have coughed up huge sums of money to keep four of their kin afloat since 2010. Most of it has gone toward making sure that private-sector creditors that have lent to Greece, Ireland, Portugal and Cyprus are repaid in full.

This choice has been expensive, and is now becoming increasingly controversial. A discussion has begun about cutting Greece's debts to its official creditors—meaning euro-zone governments could take losses. Greece, Portugal and Ireland have already gotten extra time and lower interest rates to repay loans to their European peers.

The latest example is the €10 billion ($12.9 billion) bailout of Cyprus. Of the first €2 billion installment, €1.4 billion will go toward repaying a bond issue that comes due on June 3. Conversations with bond investors indicate that much of that was swept up by hedge funds in February and early March, as the country was negotiating the rescue.

These investors paid less than the bonds' face value and now stand to make gains. In the three-year crisis, hedge funds have learned that, when a government receives a bailout, holding that government's bonds is usually a profitable bet.

In the case of Greece, which carried out the biggest debt restructuring in history in May 2012, private-sector creditors had been made whole for two years thanks to bailout money. The country, still drawing on a €174.5 billion bailout, is to this day repaying even those investors who refused to participate in its debt restructuring.