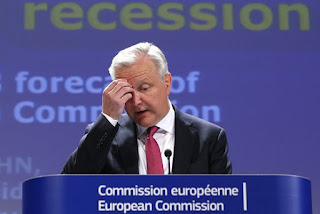 European Union authorities suggested on Friday that government austerity policies should be relaxed in a number of countries because of grim economic conditions.

The move is one of Europe's most marked adjustments to the strict fiscal discipline that has helped drive unemployment to its highest level in decades and push the region into its third year of recession out of the past five.

Yet even with this shift, government budgets in Europe will continue to be tight: The European Commission, the EU's executive arm, on Friday published forecasts that predict deficits across the EU will continue to fall, dragging further on economic growth.

Olli Rehn, the EU's economics chief, said that France, Europe's second-largest economy, should get two extra years, until 2015, to cut its deficit to the bloc's target of under 3% of annual economic output.

Spain should get until 2016, Mr. Rehn said, citing both countries' earnest efforts to rein in their public spending.

Posted by Yulie Foka-Kavalieraki at 9:04 PM