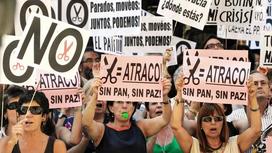 Brussels will on Wednesday give its clearest signal yet that it is moving away from a crisis response based on austerity, allowing three of the EU’s five largest economies to overshoot budget deficit limits and pushing instead for broader reform.

In its annual verdict on national budgets of all 27 EU members France, Spain and the Netherlands will be given a waiver on the annual 3 per cent deficit limit. Brussels will also free Italy from intensive fiscal monitoring despite its new prime minister’s decision to reverse a series of tax increases imposed by his predecessor.

The European Commission will make these moves on the condition that national governments embark on stalled labour market reforms. Brussels believes the delay in implementing them has contributed to the region’s unemployment crisis. “There are limits to what can be achieved with austerity,” said Maarten Verway, a senior European Commission economist.

Commission officials insist they are not abandoning “fiscal discipline” altogether, noting that even France and Spain, which will receive two-year extensions to their deficit deadlines, will still have to take stringent measures to get ballooning budgets back under control.