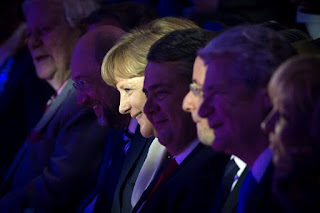 With the euro crisis refusing to relent, the German government is backing away from its austerity mandates and planning to spend billions to stimulate ailing economies in Southern European. But can the program succeed?

Wolfgang Schäuble sounded almost like a new convert extolling the wonders of heaven as he raved about his latest conclusions on the subject of saving the euro. "We need more investment, and we need more programs," the German finance minister announced after a meeting with Vitor Gaspar, his Portuguese counterpart.

The role he was slipping into last Wednesday was new for Schäuble. The man who had persistently maintained his image as an austerity commissioner is suddenly a champion of growth. If Germany couldn't manage to trigger an economic recovery, "our success story would not be complete," he said. And as if to convince even the die-hard skeptics, he added: "The German government is always prepared to help."

After three years of crisis policy, it was an impression shared by very few people in countries like Portugal, Spain and Greece. They are more likely to associate Schäuble and his boss, Chancellor Angela Merkel, with austerity mandates ushering in hardship, deprivation and unemployment.

But a new way of thinking has recently taken hold in the German capital. In light of record new unemployment figures among young people, even the intransigent Germans now realize that action is needed. "If we don't act now, we risk losing an entire generation in Southern Europe," say people close to Schäuble. 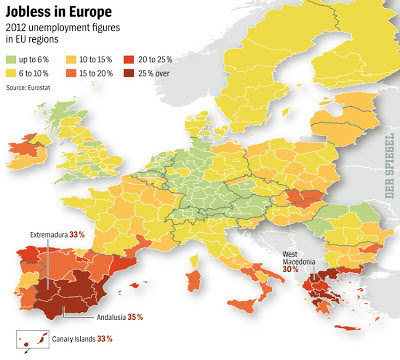 Posted by Yulie Foka-Kavalieraki at 1:29 PM