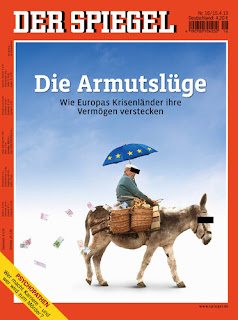 The European Central Bank normally does its best to hold the euro together, but a study it recently issued has created a furor that could do the opposite: drive a wedge in European unity.

Many Germans, egged on by German news media, are upset about the study’s conclusion — never mind how misleading — that they are among the poorest people in Europe, with fewer assets than even the bailed-out Greeks or the hat-in-hand Cypriots.

This week, Der Spiegel, the influential German newsmagazine, summed up the building sense of outrage. The cover portrayed a man, presumably a Greek, astride a donkey carrying baskets bursting with euros. The headline read “The Poverty Lie — How Europe’s Crisis Countries Are Concealing Their Wealth.”

The reaction of the German news media seems to be inflaming the debate about who should pick up the bill for the euro crisis. The central bank study suggested that countries like Greece that have been receiving handouts in fact have hidden stashes of property wealth.

That finding has not sat well with German taxpayers, who have had to guarantee more than 50 billion euros, or $65 billion, in European bailout money earmarked for Athens. Many in Germany still have not forgotten that Greek protesters taunted Chancellor Angela Merkel with Nazi symbols last year when she visited Athens.

The Frankfurter Allgemeine, one of Germany’s most respected newspapers, has accused the central bank of withholding the information until after European leaders agreed last month to a bailout for Cyprus. A spokesman for the central bank said that the report was not ready by then.

Potentially lost in the furor is the fact that even the authors of the central bank’s study cautioned that there were many reasons not to take the findings at face value.