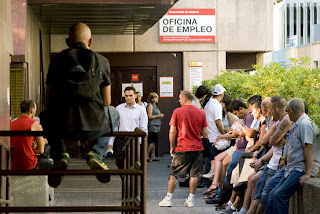 Unemployment in Spain and France has jumped to new highs, data showed Thursday, lending ammunition to a growing chorus calling for easing the euro zone's austerity drive as the cure for its debt crisis because of the high social fallout.

The jobless rate in Spain rose sharply to 27.2% of the workforce in the first quarter, the highest level since records began in the 1970s. In France, the number of registered job seekers who are fully unemployed rose to more than 3.2 million, topping a previous record set in 1997.

The weak figures in France and Spain, two of the biggest euro-zone economies, come on the heels of sharp rises in unemployment in March in the Netherlands and Sweden—an indication that the European Union's northern members are also suffering from the bloc's economic weakness.

The slowdown has prompted a broad rethink of the reliance on austerity measures in the bloc.