Are Germans really poorer than Spaniards, Italians and Greeks?

A recent ECB household-wealth survey was interpreted by the media as evidence that poor Germans shouldn’t have to pay for southern Europe. This column takes a look at the numbers. Whilst it’s true that median German households are poor compared to their southern European counterparts, Germany itself is wealthy. Importantly, this wealth is very unequally distributed, but the issue of unequal distribution doesn’t feature much in the press. The debate in Germany creates an inaccurate perception among less wealthy Germans that transfers are unfair.

Rarely have statistics been misused so much for political purposes as when recently the ECB published the results of a survey of household wealth in the Eurozone countries (2013a). From this survey it appeared that the median German household had the lowest wealth of all Eurozone countries. Figure 1 summarises the main results for the most significant Eurozone countries. 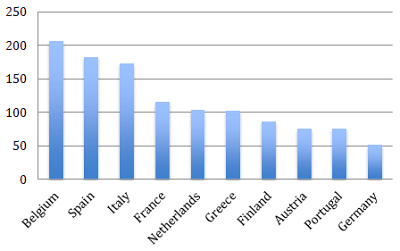 The publication of these numbers by the ECB quickly led many observers to conclude that it is unacceptable that the poor Germans have to pay for the rescue of the much richer Greeks, Spaniards and Portuguese (see, e.g., Wall Street Journal 2013, Financial Times 2013, Frankfurter Allgemeine 2013).

More
Posted by Yulie Foka-Kavalieraki at 9:46 AM