Why we should be cautious about cheering on Cyprus's no vote

Watching the drama unfolding in Cyprus over the last few days has been anything if not surreal. The far left and the Eurosceptic right alike have rejoiced at the Cypriot parliament's "valiant no" to a deal that would have ensured the financing of the cash-strapped economy from the eurozone and the IMF.

The detail they seem to miss is that Cypriots did not reject harsh austerity measures. These measures had already been agreed by the previous – supposedly communist – government of the island, and were approved by the current administration. It did not even revolt against an unjust levy on retail deposits. The eurozone had already signalled its agreement to spare small savers, on condition that assets belonging to foreign oligarchs and tycoons were subjected to a significant haircut (15.6%).

Indeed, it was the Cypriot government that rejected this option, in a dramatic 10-hour meeting of eurozone finance ministers last Friday, because it would damage the sprawling financial sector of the country. So the main demand of this "parliamentary revolt" was that Cyprus remain an offshore haven. In exchange, the Cypriot government seemed willing to offer so many concessions to Moscow as to effectively turn the island into a Russian overseas territory. Why anyone would celebrate this development is not clear. 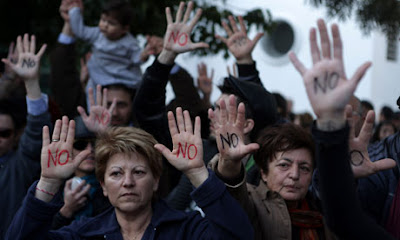 Posted by Yulie Foka-Kavalieraki at 3:40 PM