You don't need any economics to grasp what Europe and the IMF have just done to the Cypriots. Anybody can imagine how awful it would be to wake up one morning and discover that their savings have just been raided. Over the previous four "rescues" of bust eurozone countries, the details have always been swaddled in technicalities: debt restructuring this, fiscal consolidation that. With Cyprus, however, an immediate tax of up to 10% on savings accounts needs little explaining. Officials may euphemise it as a bail-in but everyone else will agree with yesterday's Daily Mail headline: it's a bank robbery.

Pensioners are losing part of their retirement savings in order to keep afloat the island's two big banks. According to the plan announced this weekend (details are reportedly being rejigged so as to win parliamentary support), poorer Cypriots will be hit with a 6.75% tax on assets so as to cushion the blow on the rich, who will have to cough up 9.9%. Up until last Friday, bank deposits up to €100,000 were officially protected. Come what may, a retiree with a nest-egg of €50,000 would not have lost a cent. She is now €3,375 poorer; her only compensation will be shares in a bust bank.

Inevitably, assurances come in that this is strictly a one-off levy. But they are being made by a Cyprus finance minister who just a few days ago waved off any compulsory requisition with "there really couldn't be a more stupid idea". Whenever the island's banks reopen, his public can hardly be blamed for pulling out the rest of their savings. 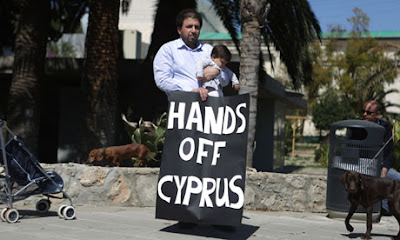 Posted by Yulie Foka-Kavalieraki at 8:49 PM