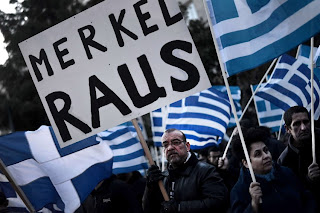 The drama over Cyprus has made clear that the euro-zone crisis is developing into a struggle over German hegemony in Europe. On the surface, Merkel and Schäuble seem to be working to stabilize the economy. In actuality, they're binding other nations with the shackles of debt.

Throughout Cyprus's financial crisis, German power has been on display. But Germany is pursuing the wrong ojectives, showing how it's incapable of wielding its power correctly. Cypriot leaders came up with the idea to make their own small-scale savers liable for the bankruptcy of the banks -- with the approval of Germany -- because they wanted to hold true to their principles of crime and punishment.

All of Europe, indeed the entire world, took notice. Despite deposit insurance and Chancellor Angela Merkel's own promises, in the end it's the common people who suffer? The plan was withdrawn, and now the burden is falling mostly on wealthy Russians. But the damage is done, confidence undermined. What is the chancellor's word actually worth? Cyprus has shown once again that Europe can't rely on the Germans.