Reflections on the Revolution in Cyprus 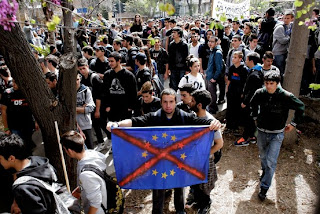 What does it look like, when a beautiful dream dies?

Cypriots woke up this week to their own answer. Their government has been bailed out by Europe, but their two biggest banks have been brought to their knees. When the banks reopen on Thursday after a 12-day holiday, deposits will gallop out—to British bank accounts, to Swiss accounts, under mattresses and into shoe boxes. Businesses that had come to Cyprus for the tax advantages will seek safer shores. Nine months after requesting a euro-zone bailout, Cypriots are watching a long, mostly genial chapter of their history come to a clattering end.

That's not to say this chapter would have gone on much longer even without a nein from Angela Merkel. At the end of 2010, Bank of Cyprus and Laiki Bank held a combined €85 billion in assets, or five times Cyprus's GDP, and €58 billion in deposits. To get a sense of what an equivalent situation in America would look like, multiply those numbers by 600: two local banks, $66 trillion in assets, $45 trillion in deposits. The actual amount of deposits in all U.S. banks is around $9 trillion.

That's not even to mention the share of employment on the island held by banks and financial services, or the industry's contribution to GDP. Over just a few decades, Cyprus had become two banks with a country attached.