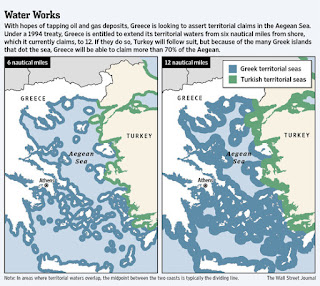 Greece has renewed its territorial claims over a broad swath of disputed waters in the eastern Mediterranean where the indebted country hopes to find vast oil and gas deposits—a plan that risks sparking a confrontation with Turkey.

Over the past several weeks, senior government officials have made a series of public statements—both at home and abroad—pointing to an almost two-decade-old international treaty granting those rights, one Greece hasn't asserted until now. Athens also has been building support in other European capitals and stepping up a diplomatic campaign at the United Nations.

This week, Greek Prime Minister Antonis Samaras broached the topic with his Turkish counterpart, Recep Tayyip Erdogan, in a meeting in Istanbul where he called on Turkey to respect Greece's rights under international law. So far, Ankara, which says those resources belong to Turkey and has warned for almost 20 years that any effort to draw new boundaries could lead to war, has called for further dialogue.

Mr. Erdogan told Greek state television on Monday that "we're approaching the issue with hope and without prejudices as we continue to work on territorial waters and Aegean-related matters. So long as the sides approach this matter with goodwill, there's no reason not to get results."