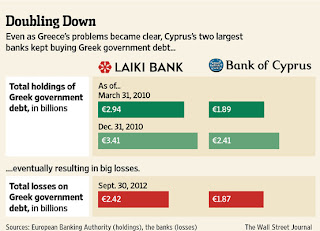 Mr. Spanodimos boasted on an Aug. 31, 2010, conference call with analysts that the bank was expanding faster than rivals in Greece and bulking up on residential mortgages. "We have used our group's comfortable liquidity and capital position to deepen selectively some highly profitable and highly promising client relationships," he said.

His bank, Cyprus Popular Bank PCL, is now ruined. Its destruction—and the near-failure of its larger peer, Bank of Cyprus PCL—was the result of poor choices by bank managers and of a European regulatory system that gave both banks a clean bill of health as their infections festered. The collapse of Cyprus's two largest banks forced the tiny country to seek an international bailout and impose an unprecedented lockdown on its financial system, bringing it to the edge of leaving the euro.

More
Posted by Yulie Foka-Kavalieraki at 1:40 AM