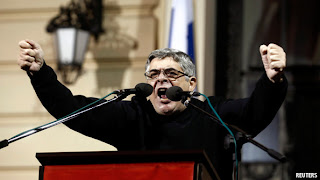 Golden Dawn, Greece’s extreme right-wing party, already has a growing presence in public high schools around the country. Teenage supporters have been spreading its racist message despite complaints by the Greek teachers’ union and left-of-centre political parties.

Now Golden Dawn is targeting pupils at primary schools. Its official website recently hosted pictures of neatly-dressed 6 to ten-year-olds, accompanied by parents, at a “national awakening” session held at a Golden Dawn branch office outside Athens. The session included a discussion on “the Olympian gods, the ancient Greek pantheon and the Christian faith". More such lessons are planned, says the party.

Shocked educators and commentators drew comparisons with propaganda methods used in Nazi-era Germany and by the military junta that ruled Greece in the 1970s. Golden Dawn was defiant. “You’re bothered by us teaching Greek history? …We’re going to write it, too”, shouted Dimitris Koukoutsis, one of 18 Golden Dawn lawmakers, during a rowdy exchange with left-wingers in parliament.

Opinion polls show support for Golden Dawn jumped from 6.9% to 11.5% soon after it entered parliament for the first time at last June’s general election. It has remained steady for several months. The party’s characteristics are violent racism (demonstrated by scores of attacks against immigrants), anti-semitic rhetoric and a “social action programme” for the needy (as long as they can produce a Greek identity card).