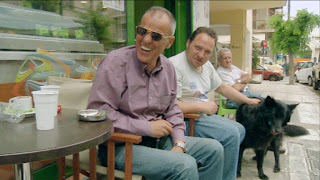 A Greek criminal prosecutor has launched an investigation after a report on Channel 4 News showed a member of the neo-Nazi Golden Dawn party threatening to turn immigrants into soap.

The investigation was opened after the Greek anti-racist crime unit referred the news report to the criminal prosecutor.

The film - which was broadcast on Channel 4 News on 5 March - was shot by Konstantinos Georgousis, with the full knowledge of the members, after spending a month filming far-right Golden Dawn party on the streets of Athens.

In the film, Alexandros Plomaritis, a 44-year-old who ran for parliament for the party in last year's election, said: "We are ready to open the ovens. We will turn them into soap ... to wash cars and pavements. We will make lamps from their skin."

Plomaritis was filmed ahead of the Greek election, and the footage also showed members of the Golden Dawn party talking openly about beating up illegal immigrants.