No doubt about it, the euro zone has crossed a Rubicon. The decision to make a €10 billion ($13.08 billion) bailout of Cyprus conditional on a one-off tax on bank deposits takes the currency bloc into uncharted territory. Under the threat of national bankruptcy, the new Cypriot government has committed to introduce a 10% levy on all deposits above €100,000 held in Cypriot banks and a levy of 6% on all deposits of under €100,000 before the banks open on Tuesday morning. In so doing, the euro zone is breaking the financial system's final great taboo.

In the early stages of the crisis, the euro zone's preferred solution to tackling the continent's debt problems was to lend governments the money to bail out holders of financial assets such as bondholders and bank shareholders, thereby passing the burden to future generations of taxpayers. But over time, as the burden of debt has ballooned and doubts over the sustainability of government finances have hardened, that approach has been partly abandoned.

In Greece, part of the burden was shifted onto holders of Greek government bonds. In Spain, Ireland and the Netherlands, losses were inflicted on junior bondholders. On each of these occasions, the financial sector loudly warned that imposing any losses on investors would trigger contagion and risk a euro collapse. Yet each time the euro survived. Now that the euro zone has gone one step further by imposing losses on depositors, there have been familiar warnings of impending doom. 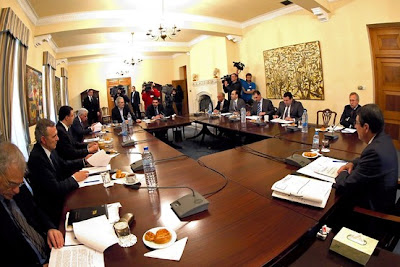 Posted by Yulie Foka-Kavalieraki at 1:10 AM