Why the Euro Crisis Isn't Over 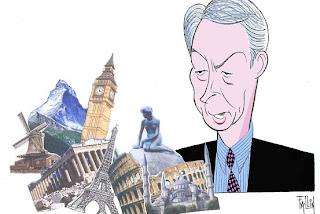 Seventeen years ago, Bernard Connolly foretold the misery that awaited the European Union. Given that he was an instrumental figure in the EU bureaucracy and publicly expressed his doubts in a book called "The Rotten Heart of Europe," he was promptly fired. Mr. Connolly takes no pleasure now in having seen his prediction come true. And he takes no comfort in the view, prevalent in many quarters, that the EU has passed through the worst of its crisis and is on the cusp of revival.

As far as Mr. Connolly is concerned, Europe's heart is still rotting away.

The European political class, he says, believes that the crisis "hit its high point" last summer, "because that was when there was an imminent danger, from their point of view, that their wonderful dream would disappear." But from the perspective "of real live people, and families and firms and economies," he says, the situation "is just getting worse and worse." Last week, the EU reported that the euro-zone economy shrank by 0.9% in the fourth quarter of 2012. For the full year, gross domestic product fell 0.5% in the euro zone.

Two immediate solutions present themselves, Mr. Connolly says, neither appetizing. Either Germany pays "something like 10% of German GDP a year, every year, forever" to the crisis-hit countries to keep them in the euro. Or the economy gets so bad in Greece or Spain or elsewhere that voters finally say, " 'Well, we'll chuck the whole lot of you out.' Now, that's not a very pleasant prospect." He's thinking specifically, in the chuck-'em-out scenario, about the rise of neo-fascists like the Golden Dawn faction in Greece.

More
Posted by Yulie Foka-Kavalieraki at 1:32 AM