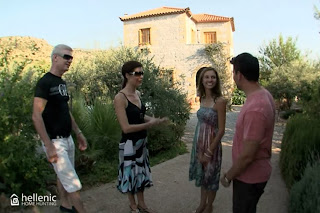 One morning in Athens, George Stroumboulis huddled with Greek network television executives about his reality show starring home buyers looking for bargains in crisis-battered Greece. The show, "Hellenic Home Hunting," follows jet-setting prospects touring homes in search of the perfect pied-à-terre or villa. Filmed in English with Greek subtitles, it is one of the first shows of its kind for the network, which had yet to test the house-hunting niche already popular in the U.S.

But there is a hitch: It isn't being shown in Greece.

"Greeks in Greece don't care about it," Mr. Stroumboulis, a 31-year-old Canadian marketer, who is of Greek heritage, said during a January visit to New York. The show made its debut early this month on Greek TV network Antenna in North America, most of Europe and Australia.

The show spotlights a stumbling block for the Greek housing recovery: Most locals lack the means to capitalize on bargain prices. With home prices falling roughly 40% since the Greek housing market's peak in 2008, prices are expected to continue to drop at least through the first half of this year, according to the Hellenic Association of Realtors. Some agents say price cuts can run as deep as 60% to 70%.

Posted by Yulie Foka-Kavalieraki at 5:35 PM