Is a Grexit off the table? 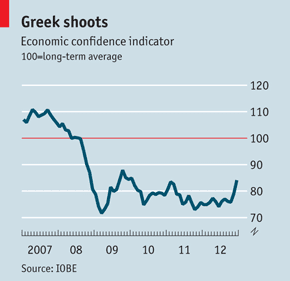 The mood in Greek business circles is brightening. Greece is still grappling with a record recession that has shrunk output by more than a fifth and pushed unemployment close to 27%, the highest rate in the European Union. But a monthly index of business sentiment produced by IOBE, a think-tank, jumped in December to its highest level in two years (see chart).

Yannis Stournaras, the finance minister, predicts the economy will start to recover by October, boosted by a long-awaited rebound in tourism. A rush of early bookings has cheered hoteliers on Aegean Islands. Optimism in foreign markets and assurances from Berlin that Greece will be able to stay in the euro zone are helping, too. Billions of euros stashed under mattresses last summer, when a “Grexit” seemed imminent, have returned to their owners’ bank accounts. The Athens stockmarket has perked up and private-equity firms are scouting for bargains among crisis-battered Greek companies.

Opinion polls suggest the coalition government led by New Democracy, a centre-right party, is becoming more stable. Several recent polls showed the conservatives edging ahead of Syriza, the left-wing opposition, despite new pension and public-sector wage cuts imposed this month and a looming property tax that enrages middle-class voters. Antonis Samaras, the prime minister, has an unprecedented approval rating of 46%, compared with 28% for Alexis Tsipras, the Syriza leader. Mr Tsipras’s trips last month to Berlin and Washington, DC, intended to polish his image as a future premier, annoyed his party’s far left and failed to impress its moderates.

More
Posted by Aristides N. Hatzis at 8:18 AM

No, a Grexit is not off the table. Remember Hans-Werner Sinn who said almost 3 years ago that Greece, in order to adjust its economy, should be allowed to leave the Eurozone to make those adjustments and then reenter it. That almost sounded like a repeat of the Latin Currency Union about a hundred years ago.