Greece: "A promise from the army has been obtained to not intervene against a civil uprising" 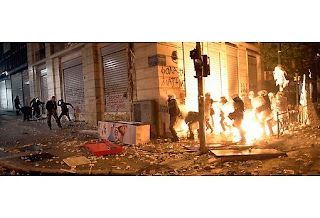 It is always enlightening to hear the frank assessment of a diplomat upon leaving the service, once unshackled from "the patriotic art of lying for one's country", as 19th Century American journalist Ambrose Bierce described the craft.

Leonidas Chrysanthopoulos was a career diplomat with the Greek foreign ministry. As a junior officer with the service in the 1970s, he helped assure the then freshly democratic nation's accession to the European Union (at the time the EEC). He was at different times Athens' ambassador to Poland, Albania and Canada, and finally the director general of EU Affairs in the ministry.

Last year, he finally resigned as secretary general of the Black Sea Cooperation organisation, and entered the private sector, and now feels free to speak openly about his fury at what he says Europe and international lenders are doing to his country.

“At a certain moment, quite soon, there will be an explosion of social unrest. It will be very unpleasant,” he says, referring to 15 armed incidents in the previous ten days. In the past few weeks, offices of the governing parties have been firebombed as well as the homes of pro-government journalists. The headquarters of the prime minister's conservative New Democracy party was machine-gunned, and days later a bomb exploded at a shopping mall belonging to the country's second wealthiest citizen, although no one has been badly injured by the attacks.