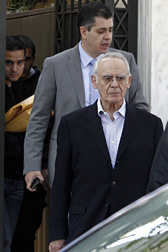 After securing 52.5 billion euros in new loans from international lenders in a fight to keep the economy afloat, Greek Prime Minister Antonis Samaras now faces a foe on another front -- the country's reputation for runaway corruption.

After generations of impunity, Greece has begun what seems to be a crackdown, although skeptics note that it could take years to prosecute major cases.

On the heels of a tax evasion scandal that led to an investigation into a former finance minister's handling of a list of Greeks with secret Swiss bank accounts, the former mayor of Thessaloniki has been arrested for allegedly overseeing a scheme to steal more than 50 million euros from the city's coffers.

The justice ministry has proposed legislation aimed at tax cheats who owe the country more than 52 billion euros as well as public officials found to have unlawfully enriched themselves.