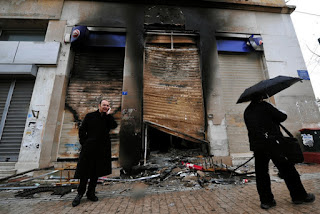 Foreign investors are returning to Greece as fears of an exit from the euro zone recede, signaling a possible turning point in the country's three-year-long debt crisis.

Amid a general rise in investors' willingness to buy riskier assets world-wide, everything from Greek real estate to energy stocks are finding buyers, promising investment in the country's cash-starved economy.

A steady trickle of foreign money pumped €109 million ($143.8 million) into Greek stocks in the last six months of 2012, followed by an additional €27.6 million in January, according to the Athens Stock Exchange. That money helped lift Greece's major stock index 33.4% last year, making it—bizarrely—the best-performing stock market in the European Union. It is up an additional 10.51% this year, to 1003.32, although it remains well off its high of 6355 reached more than 12 years ago.

At the same time, bond yields are falling. Yields on the few government bonds that remain in private hands following a debt restructuring last spring have in recent weeks sunk to levels last seen in late 2010, the year Greece got its first bailout. And for the first time in three years, Greek companies are selling bonds.