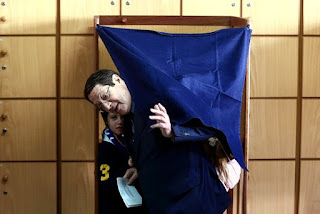 Cyprus's conservative leader Nicos Anastasiades emerged victorious in a first-round presidential vote Sunday but failed to clinch the absolute majority needed and will face a second electoral battle next week in a vote seen as key to the country's bailout hopes.

Mr. Anastasiades is expected to win in the second round, and he will immediately be responsible for negotiating a multibillion-euro loan for Cyprus and turning around the country's recession-struck economy, which is threatening to become the next flash point in Europe's debt crisis.

Mr. Anastasiades, a 66-year-old lawyer by profession, is seen by analysts as being able to get the Cypriot economy, now in its second year of recession, back on its feet. He also is a stalwart of Europe's conservative party caucus and close to German Chancellor Angela Merkel, who publicly supported his bid during a visit to Cyprus in January.

He will need those skills to help mend relations with Europe, which were sorely tested by his predecessor's unyielding stance on austerity measures and privatizations that Europe and the International Monetary Fund have demanded.