The Most Positive Thing We've Read About Greece In Years

Morgan Stanley's Daniele Antonucci has a new note on Greece titled Greece: From Shake-Up to Shape-Up?

It's the first note we recall seeing in ages that wasn't an analysis of the country's sovereign debt situation, or whether it would be forced to leave the Eurozone, or whether the latest bailout would be sustainable or not.

The note is about Greece's, economy, and whether the light at the end of the tunnel might be coming into visibility.

The answer is: Maybe.

An actual recovery isn't here yet, but Antonucci's argument is that a massive amount of uncertainty and tail risk has been removed, and that analysts under-appreciate how much the uncertainty of a Eurozone exit or default was impeding economic activity.


Growth will come from the progressive attenuation and elimination of four shocks: 1. Credit crunch; 2. Fiscal austerity; 3. Structural change; 4. Euro exit worries. We believe that most investors underestimate the impact of the huge uncertainty that these shocks have exerted on economic activity and the public finances. 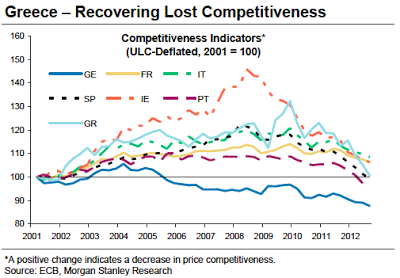 Posted by Yulie Foka-Kavalieraki at 12:37 AM