The Conscience of a Radical

Alexis Tsipras wants to know: "Here in the United States, why do you not have this phenomenon of passing money under the table?"

It is Saturday morning, and New York City is under a sheet of fresh snow. Mr. Tsipras, the leader of Greece's Coalition of the Radical Left, or Syriza, is on a brief visit to the States to meet with think-tank scholars, journalists and International Monetary Fund officials, and to be dined at the State Department.

There's a reason the 38-year-old former civil engineer is being taken seriously. His is the second-largest party in parliament. He wants to throw out the austerity diet that is the IMF-Brussels-Berlin precondition for continued financial life support for Greece. And he could one day be prime minister.

Mr. Tsipras is pondering the subject of bribery while talking about health care in Greece. Like most in Europe, the Greek state is the primary deliverer of medical care through a national health service, and—on paper, at least—it does a great job. The World Health Organization puts Greece in 14th place in its global rankings, though per capita health spending is relatively low. By contrast, the U.S., which spends the most per capita, comes in 38th place in terms of overall quality, behind such health-care paragons as Morocco and Dominica. 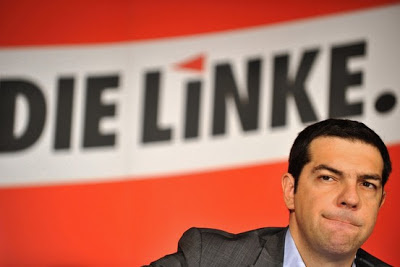 Posted by Yulie Foka-Kavalieraki at 8:19 AM