Greeks Raid Forests in Search of Wood to Heat Homes 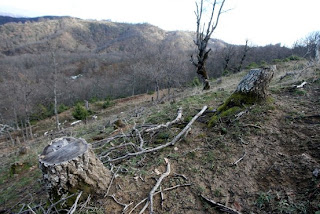 While patrolling on a recent cold night, environmentalist Grigoris Gourdomichalis caught a young man illegally chopping down a tree on public land in the mountains above Athens.

When confronted, the man broke down in tears, saying he was unemployed and needed the wood to warm the home he shares with his wife and four small children, because he could no longer afford heating oil.

"It was a tough choice, but I decided just to let him go" with the wood, said Mr. Gourdomichalis, head of the locally financed Environmental Association of Municipalities of Athens, which works to protect forests around Egaleo, a western suburb of the capital.

Tens of thousands of trees have disappeared from parks and woodlands this winter across Greece, authorities said, in a worsening problem that has had tragic consequences as the crisis-hit country's impoverished residents, too broke to pay for electricity or fuel, turn to fireplaces and wood stoves for heat.

As winter temperatures bite, that trend is dealing a serious blow to the environment, as hillsides are denuded of timber and smog from fires clouds the air in Athens and other cities, posing risks to public health.

More
Posted by Aristides N. Hatzis at 8:38 AM