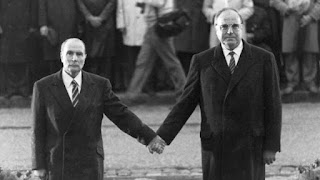 by Quentin Peel and Hugh Carnegy

One picture sums it up: Helmut Kohl and François Mitterrand holding hands in the Douaumont cemetery in 1984, beside the first world war battlefield of Verdun, where nearly 800,000 French and German soldiers died in pointless slaughter fighting for a few square miles of mud in 1916.

Two middle-aged men in winter overcoats, the German chancellor towering over the French president, they look ill-sorted and slightly uncomfortable. Yet clasping hands, they are determined to demonstrate their shared emotion at this symbolic moment of national reconciliation.

The close political and personal alliance between Mr Kohl and Mr Mitterrand – through the end of the cold war, German reunification, and the negotiation of the Maastricht treaty that decided on the euro as a common currency – was founded on that common understanding. The German conservative and French socialist were the odd couple who personified the Franco-German partnership.

This week, the two countries celebrate the 50th anniversary of the Elysée treaty, the document that laid the foundation for their close co-operation on building an integrated European Union, and for the transformation of two hostile neighbours and traditional foes into close allies.