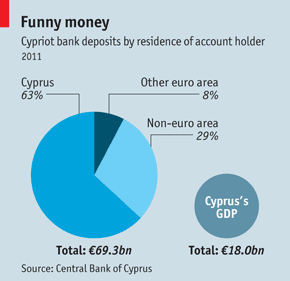 In June 2012 the Cypriot government asked for a bail-out after the two largest banks, stacked with Greek bonds, fell victim to the 2011 write-down of Greek debt. Seven months on, time is running out. The finance minister, Vassos Shiarly, says he has to find €1 billion a month to refinance loans and for other spending. Yet the bail-out could be blocked—or approved only with conditions that spark renewed alarm among investors.

This week Jörg Asmussen, a European Central Bank board member, said the problems of Cyprus could be “systemic for the rest of the euro area”. Charles Dallara, head of the Washington-based Institute of International Finance, warned of “underestimating the potential contagion impact” coming from the island.

The government says it needs €7.5 billion ($10 billion). But its banks also need more capital. A committee including Greek-Cypriot officials and the troika of the European Commission, the ECB and the IMF asked Pimco, a big American bond investor, to advise how much, and the provisional answer was €10.3 billion. But in Germany, especially, any idea of using taxpayers’ money to underwrite deposits in Greek-Cypriot banks meets stiff resistance. Last year Germany’s foreign intelligence service declared that the main beneficiaries would be Russian oligarchs, businessmen and mafios i.

Cyprus has outsized banks with big non-resident deposits (see chart). Taxes are low and the authorities encourage Russians to invest. Central-bank officials do not have an exact figure for Russian deposits, but estimate they are less than 10% of the total. Yet commercial bankers talk of a figure of 35%, as many Russian investments are disguised as local ones.