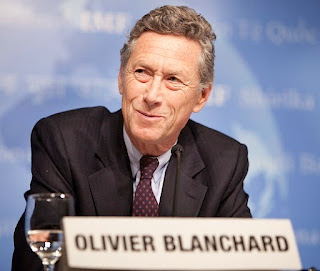 Consider it a mea culpa submerged in a deep pool of calculus and regression analysis: The International Monetary Fund’s top economist today acknowledged that the fund blew its forecasts for Greece and other European economies because it did not fully understand how government austerity efforts would undermine economic growth.

The new and highly technical paper looks again at the issue of fiscal multipliers – the impact that a rise or fall in government spending or tax collection has on a country’s economic output.

That it comes under the byline of fund economic counselor and research director Olivier Blanchard is significant. Fund research is always published with the caveat that it represents the views of the researcher, not the institution itself. But this paper comes from the top, and attempts to put to rest an issue that has been at the center of debate about how fast countries should move in their efforts to tame large debts and deficits.

If fiscal multipliers are small, countries can cut spending faster or raise more in taxes without much short-term damage. If they are large, then the process can become self-defeating, at least in the short run, with each dollar of government spending cuts, for example, costing the economy more than a dollar in lost output and thus actually increasing debt-to-GDP ratios.

That is what has been happening with a vengeance in Greece, where fund forecasters, as part of the country’s first bailout program in 2010, predicted that the nation could cut deeply into government spending and pretty quickly bounce back to economic growth and rising employment.

Two years later, the Greek economy is still shrinking and unemployment is at 25 percent.

Read the Paper
Posted by Yulie Foka-Kavalieraki at 7:22 PM